Last year at about this time, I shared with you the things I wanted to accomplish in 2014. I was successful with some, not so much with others. This year I’ve decided to give resolutions a different name: a wish list. The word “resolutions” has a do-or-die sound to it, and I don’t want to feel bad at the end of the year when, inevitably, I haven’t accomplished everything I wanted to do.

For example, you may remember (I know certain people do and they keep mentioning it to me) that I wanted to clean the garage. Didn’t happen.

I also wanted to clean the attic. Also didn’t happen. I  tried, believe me. But it wasn’t to be (nor was the replacement of my kids’ closet doors).

But I did write more and I hope I improved, I took more pictures, I became more active on social media, and I ran a 5K.

So I know you’re dying to find out what I have planned for this year. Not surprisingly, I’d like to clean the attic and the garage. I’m not going to call these resolutions, but I will simply refer to them as two items on my 2015 wish list. By the way, these will probably be on my wish list every year until I die. Replacing my kids’ closet doors should also go on the list.

Here are some other things I’ve added to my wish list:

1. start another new novel (more on this later in the year) (this is actually more of a resolution than a wish);

2. start writing a series (again, more on this later in the year–hopefully) (ditto about being a resolution);

3. replace the garage doors, one of which is held in place with a broom handle;

4. landscape my yard with something other than dead plants;

6. help my daughter sew the tote bag I’ve been promising to help her with for two years.

Want to see pictures? I knew you would (some of you may already have seen these on Facebook). 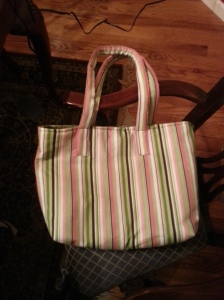 As I think of other things I want to add to my list, I’ll let you know. In the meantime, what’s on your wish list for this year? I’d love to know!