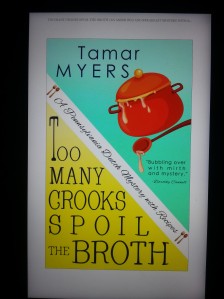 The book recommendation I have for you this week is part of the Amish Bed & Breakfast series by Tamar Myers. Too Many Crooks Spoil the Broth, which takes place in Hernia, PA, is a great read with an intriguing mystery and some laugh-out-loud moments to boot.

The book is filled with quirky characters, not the least of which is Magdalena Yoder, our intrepid innkeeper. When both her parents died in a car accident, they left Magdalena the family home, with the caveat that Mags’ younger sister, Susannah, be cut in for a share of the property when she became responsible enough. An iffy prospect, at best. Magdalena turned the home into the PennDutch Inn, an Amish Bed & Breakfast where guests are treated to an “authentic” Amish experience during their stay (including an added fee for the fun of cleaning their own rooms and making dinner one night of the week).

Susannah, who left the faith temporarily when she married a Presbyterian, is back at the PennDutch Inn and generally gets in Magdalena’s hair with her flirty ways, her immodest bling, and her dog, Shnookums (his name says it all). There’s also Freni, the stubborn and on-again, off-again cook for the PennDutch, and her husband, Mose, who has his hands full dealing with Freni.

And that’s before we even get to the guests, who are a clever mish-mash of people thrown together (perhaps not so much by chance) during the opening week of deer-hunting season in the county. Magdalena has her hands full with the dietary demands of the guests, as well as their personalities, which range from sweet to down-home to brusque to downright mean. And when the bodies start piling up, Magdalena has to figure out what on earth is going on behind the closed doors of her inn.

I loved this book. As with many of the books I read, I downloaded this one on my Kindle when it was free during a marketing promotion. And I’m so glad I did. Tamar Myers has given the reader a light-hearted glimpse into the life of an Amish innkeeper, complete with the concessions Magdalena has to make to the preconceptions much of the world has about the Pennsylvania Dutch Amish. Myers has written a fun mystery that kept me guessing to the end, with humor and a light touch that I thoroughly enjoyed.

Oh, and did I mention the book includes recipes for such things as chicken and dumplings, buckwheat pancakes, and cocoa mocha cake, to mention a few?

What are you reading? I’d love to hear!

P.S. In addition to her Amish Bed & Breakfast Mystery Series, Tamar Myers has also penned the Belgian Congo Mystery Series, the Den of Antiquity Series, and several stand-alone books. I intend to read as many as I can!

7 comments on “Book Recommendation: Too Many Crooks Spoil the Broth”