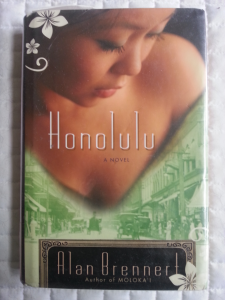 Ever since I read Moloka’i by Alan Brennert, I have wanted to read Honolulu. And I’m happy to report that Brennert did not disappoint.

Honolulu is the story of Regret, a Korean picture bride who emigrates to Hawaii for the opportunity not only to be free from the land ruled by the Imperial Japanese, but also to be free from the oppression suffered by women and girls in the Korea of long ago. Regret learns from an early age that she is inferior to her brothers (hence her given name), that her dream of getting an education is hopeless, and that her only path in life is a choice between spinsterhood and destitution or marriage in a culture where daughters-in-law are mistreated and humiliated by their husband’s families with impunity.

Regret’s decision to become a picture bride, much to her father’s mortification and dismay, is one that will alter the course of her life in ways she could not have imagined. As was the case with thousands of picture brides over the years, Regret was misled as to the social circumstances of her betrothed (she is led to believe he is handsome and wealthy, but…you’ll have to read the story to find out the truth) and as to the brutal realities of living on a tropical island during the early twentieth century.

The troubles which befall Regret as she tries to build her life in Hawaii seem almost insurmountable, and the story is told in a way that brings the reader straight into Regret’s home and into her thoughts.

I loved Honolulu. It took me a long time to read, but that was my fault–I started the book at the beginning of the holiday season and every time I picked it up to read, I was too tired to keep my eyes open for more than a couple minutes.

Regret’s story is woven into the history of Honolulu and the Hawaiian islands. It is a story of family, love, loss,joy, sadness, fear, resignation, contentment, racial injustice, poverty, and success. Though Honolulu is a work of  historical fiction, much of the story is a carefully researched commentary on the relations among all the different cultures and peoples struggling to live alongside each other in the growing city. Though Regret doesn’t always realize it at the time, she is part of the important events which shape the city of Honolulu into the modern place of mingled races and traditions it has become. Instead of calling the city a “melting pot,” Regret refers to it as a “mixed plate,” which is a Hawaiian dish consisting of different types of food, often from different parts of the world, arranged to complement each other.

I highly recommend Honolulu and I’m looking forward to reading another of Brennert’s works, Palisades Park. If you read Honolulu, I hope you’ll let me know what you think of it.