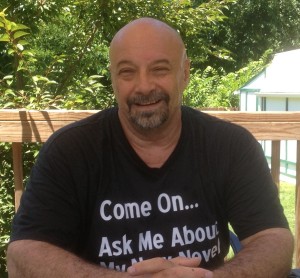 Today I welcome DB Corey to Reade and Write. I had the pleasure of meeting DB and his wife, Maggie, at the Suffolk Mystery Authors Festival in August and they are both charming and fun. DB is here to talk (with his characteristic razor-sharp sense of humor) about his newest release, The Lesser Sin. His first novel, Chain of Evidence, has garnered some incredible reviews on Amazon and I need to add both his books to my TBR.

Law Abiding Citizen meets Femme Fatale. The Lesser Sin is the first in a two-part series—a dark thriller, it’s the tale of Hanna Braver, a CIA sniper that leaves Afghanistan to hunt down the man that got away with the brutal murder of her sister. A devout Catholic, Hanna struggles with the concepts of her faith as love of family compels her to seek justice by committing the most grievous of Mortal sins, jeopardizing her Immortal Soul in the process. 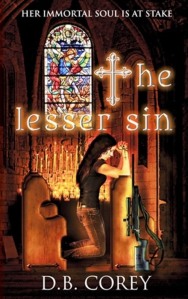 Anyone compelled by the anti-hero plotline. Anyone who cheers a progressively gritty protagonist that does the wrong thing, for the right reason … and begins to like it.

Choice – The book is set in the tristate area of Maryland, Virginia, and Delaware. Virginia was easy because Hanna works for the CIA, and headquarters (Langley) is in Virginia. Maryland because I am so familiar with the area, and Delaware because of its rural characteristics and summer resort action.

Research – I did Google Earth searches on the eastern shore area of Delaware, and several on Virginia—primarily the Langley compound. After the late-night knock on my door, I explained to the Feds that I was writing a book and that was the reason for my surveillance of Spook Central. After reading the manuscript, they decided not to put me in jail, but only because they liked the book. Said it made the agency look good. (OK, I’m only kidding, but one must be careful of what one Googles). Additionally, I spoke with local police agencies in all three states and a couple former CIA types (Retired), one of which happens to be a fellow author, and one a Beta reader and fan. A Roman Catholic priest rounds out the research pool. I was very careful as to what I asked. I don’t want to be looking up, after I’m gone.

Choice – I chose these three states because of their proximity to each other. Hanna is hunting Daemon Goode. I didn’t want it to be too easy for her.

As suggested by the title, a religious thread runs through this story: confessions, Bible passages, prayers and the like. There’s even a little Latin for those linguists and priests out there. I maintain religion in this tale as barrier, an obstacle that forces Hanna to come to terms with it, but I didn’t want the Faith component to hijack the story or have it come off as “preachy.” One reviewer pointed out that it wasn’t, so I must have succeeded. I wanted to weave it in as a character in the book, much like The DaVinci Code or The Exorcist. Not as an entity unto itself.

Ah, dreams. Hanna Braver – Gal Gadot (Wonder Woman), Cole – I lean toward Lance Reddick (The Fringe, Bosch), but he’s a bit tall for the character. Hanna is taller than Cole, but so was Jack Reacher vs. Tom Cruise, so I’ll leave that open for now.

Have you written any other books?

Sure. One really bad one (sitting on the shelf at home), and Chain of Evidence, my first novel published to rave reviews (Amazon).

I was when I started writing, stayed with a critique group for a year or so, but dropped out after that. I found that some of the folks in the group had a thin skin, and served up more resentment than constructive criticism. But, http://www.writing.com is a writer’s community, and that worked out well for me.

I try, but holding a day job makes it difficult to stick with it (sadly, writing has not provided a living wage. Yet. But I am hopeful).

Who are your favorite authors? Favorite genres?

I like thrillers, mystery, crime, humor, horror, and sci-fi. Writers? Same as most, I suppose: Patterson, King, Clancy, Cornwell, Flynn and the like. But those are easy, they’re so well known. I really enjoy reading books from writers that I know personally; colleagues I meet at festivals and conferences. The last one I read was Sand and Fire by Tom Young—an excellent military yarn by a great writer, fellow flier, and personal friend-o-mine.

Singapore and Ireland. Maybe Hawaii if my wife would let me. All those grass skirts….

Don’t let frustration deter you. READ the writers you admire—their first books. Learn from what they did. How they did it. Especially their first chapter.

Learn how to grab your reader early. That is paramount!

And while you’re at it, read:

God, so many. Scent of a Woman, The Sandlot, The Green Mile, A Christmas Story … more.

“What are you working on now?”

Well, since you asked, Amy, I’m writing the follow up to The Lesser Sin. No title yet, but the obvious choice is The Greater Sin. And I have another series on the backburner I really want to write: a near-future thriller revolving around a young girl and the grandmother that raised her, taken against her will by a desperate government. And then there’s a second in The Moby Truax (Chain of Evidence) series. So much to write, so little time. 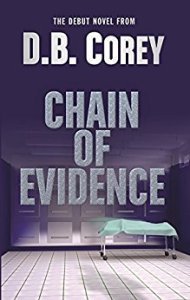 Thanks so much for stopping by, DB! Best wishes with The Lesser Sin.