When I was in college my roommate and I went to Florida for spring break. No, we didn’t party on Daytona Beach or go clubbing in Panama Beach.

We visited my grandparents.

We hit a Cincinnati Reds spring training game and bought strawberries in Winter Haven. We got sunburned lying around the pool in their fifty-five-and-over community in Lakeland. And we visited Disney World with my grandfather (my grandmother stayed home because, well, she just didn’t want to deal with Disney).

It was a fabulous spring break.

Fast forward (ahem) a certain number of years and I’m still not spending spring break partying or clubbing. This year we visited our daughter, Carolyn, in England, where she’s studying this semester. We didn’t spend more than a night with her because she still had classes, so the rest of the time we stayed in a house a little over an hour away.

For those of you who are friends with me on social media, I promised a recap of the vacation. So here goes.

We got to England early in the morning on Friday, March 30th. I hate to fly, so that’s why my first photo is of a very large, very strong Bloody Mary I had at the airport. It definitely helped.

Carolyn studies at Wroxton College, which is part of Fairleigh Dickinson University. Each semester a new crop of kids goes over to study, and this semester they were very lucky to have just 31 students. The abbey, part of which dates back over a thousand years, is where they live, play, and take their classes. We spent the first night there and it is an incredible place, from winding staircases and mile-high ceilings to suits of armor and stone floors where generations of people have walked. 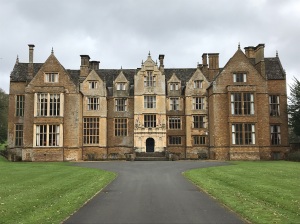 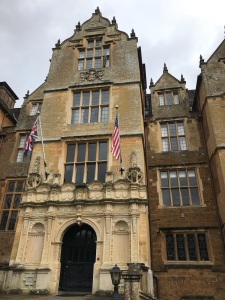 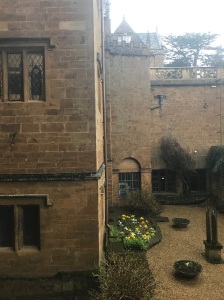 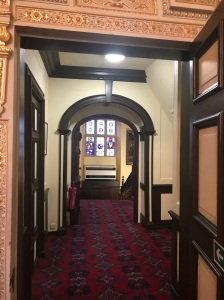 Saturday we explored the grounds of Wroxton, then said good-bye to Carolyn for the day (she and the rest of the students went to a football game–aka soccer–nearby) and went to the place we had rented, a house in Croome, in the Midlands. 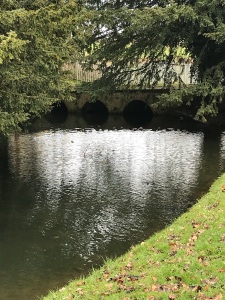 Croome used to be a private estate, owned by a pedigreed family and designed by famous architects and horticulturalists from centuries past. Now it’s a National Trust property (kind of like a National Park would be in the US) and there are several miles of walking trails on the property. It’s truly a beautiful place. 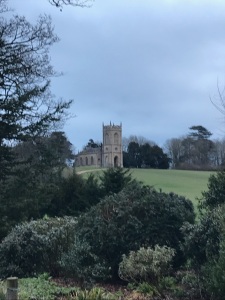 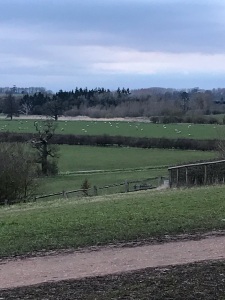 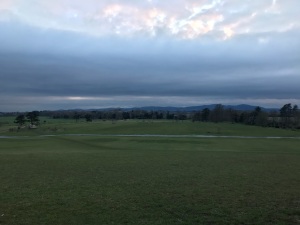 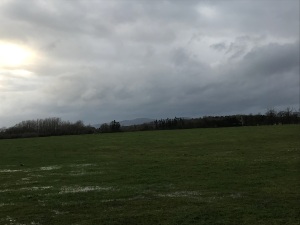 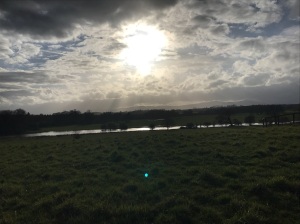 Sunday was Easter. John picked up Carolyn from Wroxton, brought her to Croome, and we spent the day exploring Croome, topping it off with a dinner at the Plough and Harrow, a carvery located not far from Croome. 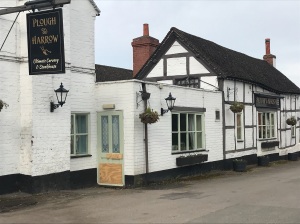 On Monday John took Carolyn back to Wroxton in time for her first class, then he returned to Croome and we left for Hereford, a town less than an hour from Croome. Hereford Cathedral is a place I read about recently and it certainly didn’t disappoint. The photos don’t do the place justice, and the artist’s exhibition of poppies weeping from an upper window in the cathedral was breathtaking. 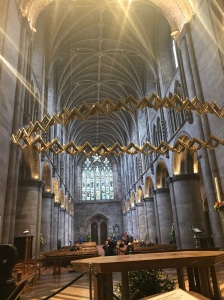 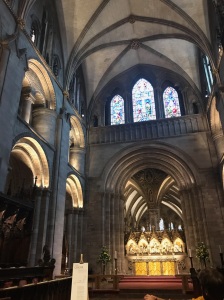 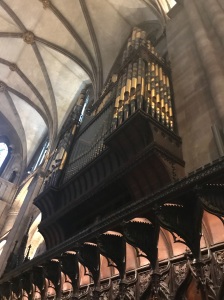 On Tuesday we went to Wales. My favorite part of the day was our drive through the Brecon Beacons, a mountain range in southern Wales that gave us spectacular views across the ranges, peaks, and valleys dotted with sheep and cows. We took an unexpected side trip to a distillery to try Welsh whisky and found a new taste we loved. 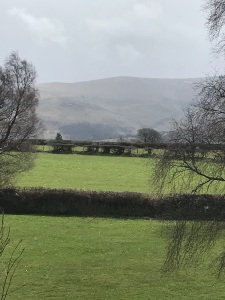 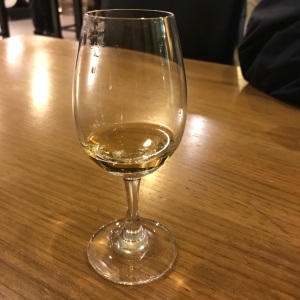 On Wednesday we went to Stonehenge. If you’ve never been to Stonehenge in the pouring rain with wind lashing it sideways, I would suggest waiting for a sunny day. But even with the abominable weather, it’s an incredible place surrounded by fields and farms. You can see the stones from a distance on the road, but when you get up close you realize how massive they are and what a feat of engineering it must have taken to get them standing. And I had no idea some of the stones had come from over a hundred kilometers away. I can’t imagine how hard it must have been to get the stones to Stonehenge. The theories about Stonehenge (who lived there, why they’re there, what is the significance of the stones) are fascinating. We could have spent longer there, but we were soaked to the skin and we wanted to get to Bath.

Bath is a city where we wish we had been able to spend more time, but we enjoyed our short visit there. It’s so named after the Roman baths that were built there during the height of the Roman empire. There are hot springs under the city and the Romans used ingenious methods to use the springs to create an awe-inspiring series of baths, pools, saunas (called sweat rooms), and heated floors where Roman citizens of every stripe would come to bathe, exercise, and socialize. The hot springs are still there, still providing hot water to the pools and baths, but today there’s a large interactive visitors center on the site rather than a place for bathing. 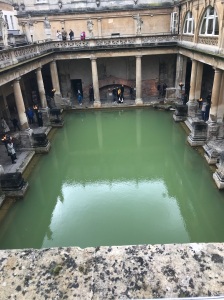 On Thursday we visited Stratford-Upon-Avon, the town of William Shakespeare’s birth. We had only intended to stay for a few hours, but it’s so fascinating that we ended up spending the entire day wandering the crooked streets and visiting the homes and places that were instrumental during Shakespeare’s lifetime. We visited the house where he was born, the house where his daughter lived as an adult, the grounds of the home where he lived with his wife and children in the (almost) two decades leading up to his death, the home where his wife, Ann Hathaway, grew up, and the home where Mary Arden, Shakespeare’s mother, lived as a child. It’s still a working farm. We also had a proper English tea, complete with scones, clotted cream, and strawberry jam (though I preferred the lemon curd). It was, we agreed, our favorite day of sightseeing. 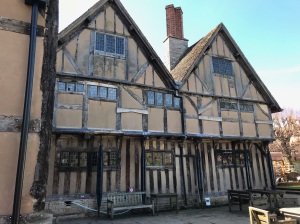 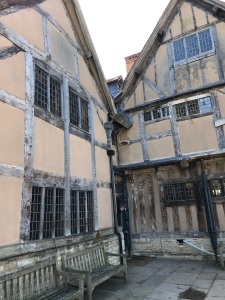 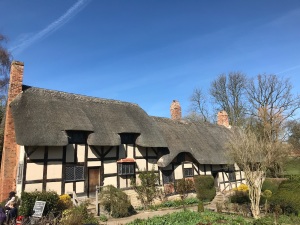 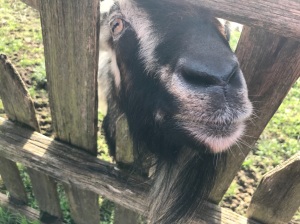 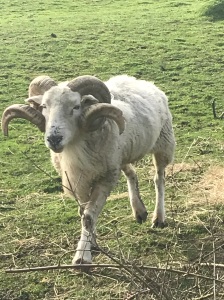 On Friday we went to see Carolyn again, this time to celebrate her twentieth birthday exactly one week early. We had a lovely time walking the grounds of Wroxton again, and we hated to say good-bye when the time came. But we needed to get back to Croome to start packing for the trip home.

Saturday we flew home, all of us exhausted and happy after a whirlwind week seeing all the things we had wanted to see and walking miles upon miles in the process. And on Sunday I picked up the dog from the kennel! That, to me, is the best part of coming home.

I hope you’ve enjoyed a vicarious trip to England through this post. Our next vacation won’t be for a long time, so I’m going to have to come up with new post ideas…

Remember that this month’s book club selection is Stolen Memories by Mary Miley. I still haven’t started it, but I will in the next couple days. I hear it’s really good!

Next week: a book recommendation. I haven’t done one of those in a while and I have a great book to share with you.

The Life She Was Given for May, by Ellen Marie Wiseman.