Today I welcome Cassidy Salem to Reade and Write. Cassidy is the author of the Adina Donati Accidental Sleuth Mystery Series. She’s here today to talk about her latest release, Fit for Murder, the fourth book in the series. Welcome, Cassidy!

Congratulations on your latest release! Tell us a little about the book, Fit for Murder.

In the latest addition to the Adina Donati, Accidental Sleuth Mystery Series, Adina is unable to restrain herself when it looks like someone has done in her Pilates instructor. So what if it was ruled an accidental death? She’s not convinced and sets out to discover the truth – with or without help from her favorite detective.

Tell readers about the first three books in the Adina Donati series.

The Adina Donati, Accidental Sleuth mystery series features a young college graduate and her experiences living alone in Washington, D.C. Adina works at a think tank that focuses on public policy, where current issues (environmental protection, immigration, cybercrime, healthcare, and more) are a natural part of the agenda.

The first book in the series, Think Murder, introduces the reader to Adina and her world as she addresses the challenges of making it on her own in the city. Then, when a friend and colleague is murdered and she finds the body, Adina is drawn into the middle of a murder investigation.

At the start of Dying for Data, her romantic evening with a hot guy goes downhill fast when their dinner is interrupted by the scream of sirens and the arrival of Adina’s favorite detective. Although this is still a cozy mystery, the plot in this one touches on issues related to illegal immigration and crime in the city and the plot is a tad edgier than in other books in the series.

Killer Reputation takes the reader back to the cozier side of Adina’s life. When a colleague meets a violent death, Adina’s not convinced any of the obvious suspects disliked him enough to want him dead.

Tell us more about the main character of the series, Adina Donati: What is her job like at the think tank? What does she do in her spare time? Anything else we should know about her?

Adina is college graduate in her mid-20s who is determined to make it on her own. She works at the Drake Institute for Public Policy Research as an admin assistant. Not her dream job, but it does pay the bills.  And she has a great boss.

Adina is smart and talented, and kind. She has an independent spirit, but she is willing to accept help from others.  In her spare time, she volunteers at an animal shelter, and a different dog from the shelter is featured in each story.

What was the hardest thing about writing Fit for Murder?

Figuring out who the killer was.  I confess, I don’t outline – I just sit down and write with only a vague idea of where a story will go. I knew who I was killing but I only decided who the actual culprit was after I had written more than half of the book.

Of course, the well-known locations in city are based on real places and landmarks.  Nonetheless, the smaller parks, pubs, restaurants and such are entirely fictional.  That said, Adina’s basement apartment is loosely based on the apartment I lived in when I moved to D.C. after graduating from college. Like Adina, it was all I could afford when I was unable to land my dream job.

What’s next for Adina Donati?

I have yet to decide exactly what will happen, however  I think it’s time to take Adina and Jonathan out of the city for a weekend in the next book. Who shall I kill off this time? Suggestions anyone?

Are you working on any other writing projects right now?

Yes. Together with Christa Nardi, I am currently working on The Midway Mystery, the fifth book in the Hannah and Tamar YA Mystery series.  The series features two teenaged sisters with a knack for solving mysteries.

What’s your favorite way to promote your books?

I enjoy connecting with readers and other authors on Facebook and other social media.

What is your favorite part of the writing process? Least favorite?

I enjoy letting the characters tell me where they want to go and that “ah-ha” feeling when I have solved my own plot puzzle.

On Amazon, in paperback and digital editions. They are also available with Kindle Unlimited.

Now for some fun rapid-fire questions.

Coffee, tea, or some other beverage?  Diet Coke.

Early bird, night owl, or something in between?  Night owl. 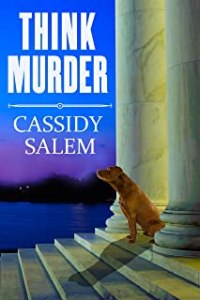 Cassidy Salem has always been an avid reader. She is especially fond of mysteries (both cozy and traditional) and police procedurals. Over the years, her favorite mystery authors have included Agatha Christie, Kathy Reichs, Mary Higgins Clark, and John Grisham. When she’s not reading, she enjoys music and spending time with family and friends, and travels with her husband and son whenever possible. Her travels have taken her to destinations throughout the United States, Europe, and Scandinavia.

A member of Sisters-in-Crime, Cassidy is the author of the Adina Donati Mystery Series, which includes Think Murder, Dying for Data, and Killer Reputation. Cassidy co-authors, together with Christa Nardi, a YA mystery series, which includes The Mysterious Package, Mrs. Tedesco’s Missing Cookbook, The Misplaced Dog, and Malicious Mischief.