Macy Stoddard, a nurse from Manhattan, comes to Hallstead Island in the North Country of New York to escape her haunting pain.  It is here that Macy discovers secrets that were not meant to be shared – secrets that reach back into Macy’s past and that will change her future and the futures of the people on Hallstead Island.  There are those, however, who will stop at nothing to keep the secrets that are hidden there. 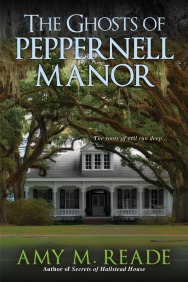 The Ghosts of Peppernell Manor

Carleigh Warner, a recently-divorced mother, leaves her home in Chicago to take a job restoring an antebellum plantation manor outside Charleston, South Carolina.  As she and her three-year-old daughter are beginning their new life in the South, Carleigh becomes aware of an underlying tension in the household among family members who disagree over the future of the property.  After the untimely death of the manor’s owner, rifts become wider and suspicions swirl as the family struggles to learn who is behind the disturbing occurrences that begin to take place at Peppernell Manor.

House of the Hanging Jade

Kailani Kanaka, a sous-chef in Washington, DC, is tired of winter and longs to return home to her native Hawaii. When she is offered a job as personal chef to the Jorgensen family on the island of Hawaii, she jumps at the chance to go back to the tropics. But all is not what it seems in the Jorgensen household. Kailani unwittingly becomes a keeper of secrets, forcing her to make tough decisions about her loyalties while simultaneously facing a stalker from her past. 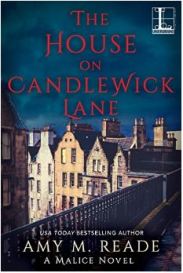 The House on Candlewick Lane: Book One in the Malice Series

Dr. Greer Dobbins finds herself in the middle of every parent’s worst nightmare when her five-year-old daughter, Ellie, is kidnapped from school. As Greer follows the kidnapper’s trail to Scotland, the country of her birth, she realizes that in order to find Ellie, she will have to face the memories from her past that continue to haunt her and threaten her future and that of her little girl.

Sylvie Carmichael and her husband Seamus are living in the Highlands of Scotland, happy with their art gallery, their antique shop, and Sylvie’s photography business, when a stranger from London appears looking for a special painting. Within hours, a second person has come to find that same painting; suddenly the first stranger is dead, the second person is gone, and the painting has disappeared. What was so special about that painting? As those people who want it get closer and closer, Sylvie will find her very life is in danger. And that’s not all she has to worry about…she’s beginning to realize that Seamus hides a secret that may change everything.

Murder in Thistlecross: Book Three in the Malice Series

Eilidh Cameron comes to Wales from the Scottish Highlands following a tragic and bitter divorce. As the house manager for a centuries-old castle in the village of Thistlecross, it’s her job to make sure the children of Annabel Baines are comfortable and entertained while they visit Annabel. And as Annabel’s friend, it’s her fear that Annabel’s sons are hiding something. From the moment the first son arrives with his wife, it’s clear there are tensions in the family that will have to be resolved for the sake of peace in the castle. And when a shocking murder takes place, Eilidh feels it is her duty to remain at the castle to help Annabel through the painful aftermath. But Eilidh’s fierce devotion to Annabel may prove to be more dangerous than she could have imagined.

The Twelve Slays of Christmas: The Worst Noel

This was my contribution to a 12-book set of Christmas-themed cozy mysteries called The 12 Slays of Christmas. ​

The boxed set hit #6 on The Wall Street Journal bestseller list and all proceeds were donated to animal shelters.

​The Worst Noel was the first book in my new Juniper Junction Mystery series and I plan to make it available again in the fall of 2018.

​“You know it’s going to be a long day when you come to work on the busiest shopping day of the year to find a dead body on the floor. Juniper Junction, Colorado, is not some gun-slinging Wild West outpost; it’s a tony resort town where people come to get away from it all. And as the President of the Chamber of Commerce, it’s my job to make sure that happens. But add two teenagers, a failing parent, and a deadbeat ex-husband to the mix, and it’s beginning to look a lot like Christmas chaos.”

Click on the book cover to be redirected to Amazon and/or my website, where you can read a description of each book and follow me for news and updates!