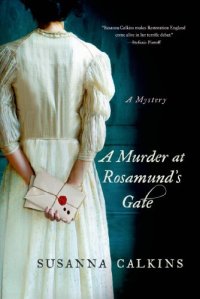 I picked up A Murder at Rosamund’s Gate at the library–on a whim, which is how I pick out a lot of my library books. And I wasn’t disappointed. Susanna Calkins’ debut mystery had me guessing right up to the big reveal at the end. I had picked practically every character in the book as a suspect before the end, and I was still surprised to learn who the killer was. This is a book I highly recommend for anyone who loves a good mystery, Restoration England, and above-stairs/below-stairs intrigue.

A Murder at Rosamund’s Gate is the story of Lucy Campion, a chambermaid in the London home of Magistrate Hargrave. The tale is set in the seventeenth century and the amount of research that went into the book is astounding. The author’s vast knowledge of this time period  (she has a doctorate in British history) is obvious and imbues the text with a richness that would be hard to fake.

Lucy’s life is nothing but an endless cycle of drudgery until a series of murders catches the attention of London and another servant in the Hargrave household becomes a victim. Lucy takes it upon herself to find out all she can about the victim (whom Lucy thought she knew very well…but she may not have known the victim as well as she thought) and before long she finds herself in some shady places where no self-respecting young girl would have ventured alone in the seventeenth century. As she gets closer and closer to learning the truth about the murder, Lucy becomes embroiled in a life-threatening confrontation and has to fight harder than she ever dreamed if she wants to emerge from the ordeal alive.

There’s a little bit of romance in the book, too–just enough to give it that extra spark.

Did I mention that all this takes place against the backdrop of the deadly London Plague? The plague killed 90,000 Londoners before its ravages came to an end. Add to that the horrors of the Great Fire of London, and you’ve got yourself a pretty fantastic story.