And if you haven’t read the book, this is your chance!!

Here’s a quick summary of the novel:

It is every parent’s worst nightmare. Greer Dobbins’ daughter has been kidnapped—and spirited across the Atlantic to a hiding place in Scotland. Greer will do anything to find her, but the streets of Edinburgh hide a thousand secrets—including some she’d rather not face.

Art historian Dr. Greer Dobbins thought her ex-husband, Neill, had his gambling addiction under control. But in fact he was spiraling deeper and deeper into debt. When a group of shady lenders threatens to harm the divorced couple’s five-year-old daughter if he doesn’t pay up, a desperate Neill abducts the girl and flees to his native Scotland. Though the trail seems cold, Greer refuses to give up and embarks on a frantic search through the medieval alleys of Edinburgh—a city as beguiling as it is dangerous. But as the nightmare thickens with cryptic messages and a mysterious attack, Greer herself will become a target, along with everyone she holds dear.

Doesn’t that sound like something you want to read TODAY?! 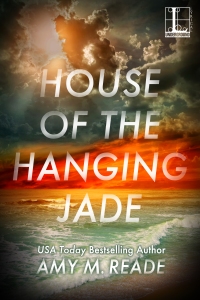 House of the Hanging Jade comes out in two weeks: at 12:01 a.m. on Tuesday, April 26th. In case you’re counting (I know- I’m the only one who’s counting), that’s just 356 hours and 1 minute from the time this post goes live. So it’s time, don’t you think, for an excerpt? Maybe two?

I was still working for Geoffrey a couple weeks later, still floundering through the endless winter weather and finding our relationship a bit awkward. He made excuses to be wherever I was, whether it was in the kitchen or the basement of the restaurant or while I was coming to work or leaving work to go home. I was actively looking for a job on the Big Island, and didn’t want to return home without any employment prospects, but I was seriously beginning to consider going home without a job just to get away from Geoffrey. I had told all my friends and colleagues in DC and on the island of Hawaii that I was going back home; everyone wished me well.

One night I worked very late at the restaurant. I couldn’t catch a cab, so I had to walk home. I walked briskly on the dark sidewalk, trying to stay warm. I slipped on a patch of ice at one point, dropping my bag. As I stooped down to pick it up, I noticed a man walking not too far behind me. He had a toque pulled low over his forehead. I walked a little faster after that, not wanting to be the only woman on the street late at night. I glanced over my shoulder and noticed that the man walked a little more quickly too. A shiver of apprehension crept up the back of my neck. I ducked into a tiny twenty-four-hour grocery store and browsed for a few minutes, buying nothing, but giving the man plenty of time to walk past me and continue on his way.

When I went back outside, I looked left and right to make sure no one was following me. Seeing nobody, I kept walking, but it wasn’t long before I noticed the same man walking slightly behind me and on the other side of the street. I wanted to run, but I couldn’t because the sidewalks were too treacherous. All I could do was fumble for my cell phone and have it handy to call 911 if he came any closer. I looked over my shoulder again; he was crossing the street, walking a bit faster. I went faster too.

I took off my gloves and shoved them in my coat pocket so I could dial 911 quickly. I was almost in front of my building, pulling my phone out of my other pocket when I heard footsteps directly behind me. The man grabbed my elbow and I let out a cry.

“Geoffrey! You scared me to death! What on earth are you doing?”

“I was just following you to make sure you made it home okay,” he said, still gripping my elbow.

“You’ve never done that before,” I said, my voice grating in irritation. “Why start now?”

“I was just concerned about you, that’s all.”

“Thank you, but I’m fine. Don’t ever do that again. You really scared me.”

I shook his hand off my elbow and walked away. As I unlocked the door to my apartment building, I saw him out of the corner of my eye, watching me. I shivered, but not from the cold. Now I really couldn’t wait to leave Washington. And Geoffrey.

I was crouched down, looking for a Dutch oven, when Akela came in. “Kailani, there’s someone here to see you.”

“He didn’t give his name. He’s waiting at the end of the driveway. The police wouldn’t let him come up to the house, so one of them came to escort you.”

I followed Akela to the front door, where an officer stood waiting. He explained that he and his partner could not allow anyone on the property and said he would take me to see my visitor. We walked in silence to the end of the driveway. Another officer was stationed by the large gate, and on the other side of it a tall man in shorts and a T-shirt stood with his back to me. Even before he turned around I knew who it was.

“Geoffrey? What are you doing here?” I asked, incredulous. I had only emailed him a couple times since leaving Washington, and none of those emails had included an invitation to visit or the location of my new job. I opened the gate slowly.

He turned to look at me, a big grin spread across his face. “Surprise!” He came forward and gave me a big hug. I pushed myself away gently.

“I can’t believe you’re here! What made you decide to come all the way to Hawaii?”

“You! What else?” I stole a glance at the officers, who were politely looking in the other direction.

“Wow. I’m flattered. I wish you’d told me you were coming, because I could have met you at the airport or something.” I faltered, searching for the right thing to say. I thought he had realized that I didn’t want to see him anymore. That he wasn’t part of my life in Hawaii the way he had been in Washington.

He stepped back a bit. “Is it okay that I’m here? I mean, do you mind? I just thought it would be a nice surprise.”

“Oh, no,” I assured him quickly. “It is a nice surprise. I just can’t believe you came all this way, that’s all. How did you know where to find me?”

“It’s a long story,” he said vaguely. I let that go for the moment.

“Why are the police here?” he asked.

His eyes widened. “Really? Who?”

As release day approaches, I will be updating my blog about my blog tours (lots of giveaways!) and other places online where you can find excerpts of House of the Hanging Jade, other guest blogs, and interviews. I hope you’ll take a look!

And one more thing: I’m 51% of the way to my goal in my Thunderclap campaign! I hope you’ll consider lending me your voice of support on the day my book comes out- Thunderclap does all the work. All you have to do is click the link and sign up to support me on Facebook, Twitter, or Tumblr! Here’s the link: https://www.thunderclap.it/projects/38945-be-a-part-of-a-book-birthday. And thank you!