As regular readers of my blog know, my first novel, Secrets of Hallstead House, is coming out in July. It’s set in the Thousand Islands. For those of you who aren’t lucky enough to be familiar with the region, the Thousand Islands is an area that stretches for about fifty miles from Southern Ontario, Canada, into Northern New York.

Here’s a good way to picture it: if you think of the St. Lawrence River as a huge unclasped necklace, the Thousand Islands are its emerald jewels.

Part of my goal in writing the novel was to acquaint readers with the region. I’m hoping this blog post will serve as a primer for people who don’t know the area and as a good memory for those who do know it.

I grew up close to the river, and I spent lots of time there as a child and young adult. The place I remember most vividly is an island called Lazy Bea Isle. It’s not known by that name anymore because it has changed owners, but the island used to belong to my grandmother’s aunt and uncle and I spent lots of time there as a child. We used to stay there during the summer sometimes. It was never like camping, which I don’t love, because there was a big cottage and a bathroom and shower and kitchen and all the things one needs for comfort. It always smelled like pine trees. We used to pick huckleberries from the wild bushes that grew there and we could go fishing and swimming right off the rocks in front of the cottage. The island wasn’t far from Schermerhorn’s Landing; we could walk through the woods near Schermerhorn’s and row a small boat that was kept there over to the island. Or we could hop on my grandfather’s boat at the landing and take the long way ’round.

My grandfather’s boat is another thing I remember well. He and my grandmother and the six people in my family would pile in on a Saturday and just ride around for a few hours. We would take a cooler with lunch and there was always Fresca, which is still my favorite soda. My grandfather kept his boat until I was in my 20s, when he finally had to sell it.

And then there’s Boldt Castle, which makes an appearance in my book. It’s an actual castle located on Heart Island, not far from Alexandria Bay, NY. The three photos below, taken by H. Ross Ney, give a glimpse of its splendor and magnificence. If you ever have a chance to visit the Thousand Islands, don’t leave until you’ve toured Boldt Castle. 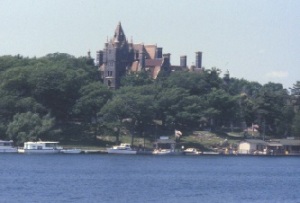 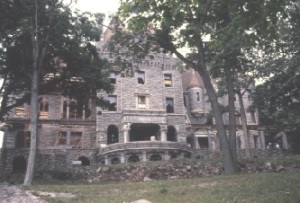 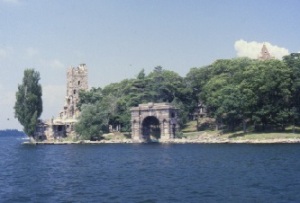 The St. Lawrence River is where I learned to water ski, too. I always wished I could be as good as my aunt, but I never achieved that kind of skill. I had a hard time jumping the wake, so I always stayed inside its boundaries. She could ski inside or outside the wake, and on one foot. I couldn’t do that, either. It’s been a long time since I was on water skis and I’ll probably never do it again, but it’s a great memory that I cherish.

My favorite memories are really more of a feeling than a remembrance of certain places. It was a feeling of freedom, of joy, of amazement at the size and majesty of the river, the different beauty of each island, the quiet, and the sheer fun of being on the water. The memories are part of me. I hope that someday you have a chance to visit this wonderful place.

Many thanks to Ross Ney for taking the time to send me the beautiful pictures of the castle and the river.

What are your favorite memories of growing up? I’d love to hear them.