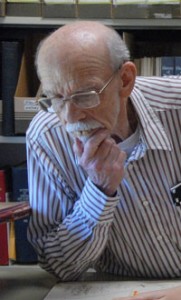 Today on Reade and Write I’m pleased to welcome back John Lindermuth. He’s here today to discuss his new re-release, The Tithing Herd. You may recall reading about him on Reade and Write about a year ago, when he visited to talk about two of his other books, Something So Divine and Shares the Darkness (if you’d like to take a look at that post, you’ll find it here)

The Tithing Herd might best be described as a traditional Western. That is, like other traditional Westerns, it might be seen as a morality play. It features an ex-lawman (hero) faced with first a moral crisis (does he seek revenge or justice? Should he seek revenge on those who murdered his brother rather than depend on the law to judge them?) and then a more physical challenge when the outlaws kidnap the woman he loves.

I should mention The Tithing Herd was originally published in electronic format several years ago by The Western Online, which has since gone defunct. I’m pleased Sundown Press decided to resurrect it in both print and electronic formats.

Anyone who likes a good story with adventure, suspense and a bit of romance.

The story is set in New Mexico in the 1890s. The idea had its germination when I read about cash-strapped Mormons gathering herds of cattle and sheep to pay their tithe to the church. The plot developed from there.

A story based in an historical era and/or setting requires more research than, perhaps, a contemporary tale. But I don’t consider that a hardship. I love research, though it can sometimes lead off into some unusual tangents.

If Hollywood should decide to make that kind of offer, I’d be delighted. Meanwhile, I’ll be happy if people find the premise interesting enough to want to read it.

Tell us about your other books, for those who may not have read your post from last year.

The Tithing Herd is my 16th published novel. The majority are mysteries of one kind or another, including seven in my Sticks Hetrick series. This is my second (official) Western. I say that because though my Sheriff Tilghman series is set in the 19th century in Pennsylvania the first two books were billed as Westerns by the publisher.

I’ve never been in a traditional critique group but I do exchange views with some other writers and we do give one another feedback.

I think it’s a good practice and I try to do something every day, even if it’s no more than some scribbling in my journal. I don’t lock myself into a prescribed word count.

I’m a serial reader. I read both fiction and non-fiction. In fiction, mysteries probably top the list but I also read many other genres as well. In non-fiction, anything that rouses my curiosity. Authors? Too big a list to mention and I’m constantly discovering new ones–both famous and unknowns.

Given a time machine and a good supply of penicillin, Africa in the 1920s/’30s. Aside from that, another trip to Mexico; a visit to South Korea to see all the changes since I lived there in the 1960s, and England.

The same given by Stephen King and many others–read a lot and write a lot. It’s the only way to learn–and a heck of a lot of fun.

I’ve said this often before–The Gods Must Be Crazy I and II. Epic comedies with insight into human nature. Jamie Uys was a genius. And then there’s Hitchcock and the Coen brothers. So many other good films in so many classic genres, including drama, Westerns, mysteries.

Why wait so long to do the things you really want to do?

Thanks for stopping in today, John! It was a pleasure having you back on Reade and Write.