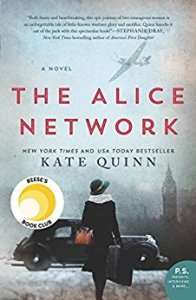 Wow. That’s the first word that came to mind when I finished this book. It was a roller coaster of a ride, with a (very) few ups and enough soul-crushing downs to make the most devoted reader require a break every now and then. But it was also riveting, addicting, and based on  a network of spies that actually existed during World War I.

It’s the story of two women: Eve, the WWI spy, and Charlie, a young woman who enlists Eve’s help in looking for her cousin following the end of World War II. Eve is broken and bitter; Charlie is unsure of herself and lacks confidence in her future. They are connected in ways that aren’t immediately apparent, and their similarities are many. I don’t want to spoil the book for anyone who hasn’t read it, and I highly recommend that you read it if you haven’t.

So here are the questions I have this month, some of which I have borrowed from the discussion at the end of the novel:

This will be the last book club discussion for the time being. It hasn’t been as successful an idea as I had hoped, and I would like to come up with other ideas for a regular blog feature that might get more interaction. Any ideas?

A huge thanks to those who read and discussed the books–a discussion makes the experience of reading a book even richer and deeper, and I loved hearing your thoughts and learning from you.