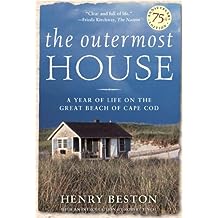 Henry Beston’s book, The Outermost House, was on my list of summer reads this year (see post from June 19th) and I’m happy to report that I enjoyed it very much.

It’s not what I expected, but that’s okay. What I expected was a day-to-day diary of the mundane things Beston did for a year on Cape Cod: what he did to ready the house for winter, the things he cooked, what he did when he encountered snakes, how he communicated with the rest of the world, etc.

What I got instead was a season-by-season account of the natural world on Cape Cod: how the tides change, how the beaches shift and move, where the birds and animals go when it storms, how the grasses move in the wind, and what the sun looks like on the water. It’s a beautifully-written book that manages to describe everything from sunrises to deadly storms with lyrical language that soothes, surprises, describes, and teaches.

One can see how it had such an impact on Rachel Carson’s Silent Spring, one of the seminal books on environmental protection and conservation.

The Outermost House wasn’t like any other book I’ve read: it wasn’t fast-paced, there was no suspense, and it didn’t keep me up at night. Rather, it was something I looked forward to reading when I wanted to relax and be calm. And from what I’ve read about the book, it has that effect on lots of readers. I highly recommend it to anyone who wants to know more about the natural world, who wonders what life might have been like on a deserted New England beach in the early decades of the twentieth century, and who wants a break from the busy-ness and hectic schedules we all have. I think you’ll enjoy it.